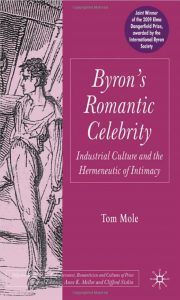 Read more on the publisher’s website
Purchase from Amazon.com

Winner of the Elma Dangerfield Prize, 2009

“This superb book provides an adroit analysis of the ways that a specifically Romantic celebrity culture informs Byron’s oeuvre – from the ‘Frame Bill’ ode to Don Juan. Yet it does much more than that. In fact, Mole manages to recontextualize the entire concept of Romantic fame as a complex interplay between industrial print culture, historical individuals, and the readerly paradigms of the era. It is this broader lens that enables the book to shine new light on such issues as Romantic subjectivity, authorship, visual iconography, and the nineteenth-century dialectic between public and private.”

“At last Tom Mole offers a study of Byron’s celebrity that focuses on his diverse and at times groundbreaking body of work rather than his sensational biography. Each chapter examines not only a certain aspect of Byron’s fame but also one of his poems. Most of Byron’s major works, as well as some less expected poems, are treated to Mole’s combination of cultural-material analysis and illuminating close reading. […] Mole’s book makes a significant contribution not only to Byron scholarship, but to the study of celebrity culture more generally. […] Mole writes with an effortless blend of accessibility and intellectual gravitas.”

“Anchored by a scrupulous attention to the historical and bibliographical contexts of Byron’s poetry, the book offers […] new ways of thinking about why Byron captured public attention so intensely. […] Mole’s study has its deepest roots in the archive of Regency print culture: each chapter is informed by meticulous bibliographical research, and often by genuine scholarly discovery. […] The wonderful depth and tenacity of Mole’s investigations […] [is] palpable in the many fine readings and scholarly contributions in evidence throughout. […] [A]s a multi-faceted demonstration of Byron’s Romantic celebrity, it is indeed an extraordinarily valuable contribution.”

“Byron’s fame never ceases to fascinate. […] Of all the books […] most worth reading with regard to the idea of celebrity are Tom Mole’s Byron’s Romantic Celebrity: Industrial Culture and the Hermeneutic of Intimacy and Claire Brock’s The Feminization of Fame.”

“This monograph succeeds admirably in combining sensitive textual analysis, careful bibliographical research and awareness of the broader material aspects of the history of print culture.”

“Tom Mole’s study of Byron’s celebrity has found a genuinely new way of approaching the poet and his work”.

“The book begins with a beautifully articulated discussion fo the etymology of ‘celebrity’ […] Chapter 7, on Childe Harold III, illustrates all the strengths of the book in provocative contextual relocation, sharp attention to the material history of the poems and perceptive close reading. […] This is a brilliant and compelling section. […] This is a stringent and searching book and timely one, too[.]”

“In a superb closing chapter, Mole shows how Don Juan adopts an anachronistic conception of subjectivity as a direct critique of the celebrity culture that Byron had helped instigate. Romantic celebrity, for Mole, helped in the development of modern ideas of selfhood as deep and developmental. The genius of Don Juan is that it undermines these assumptions from the inside. It is a fitting conclusion to an excellent book.”

“Tom Mole’s Byron’s Romantic Celebrity: Industrial Culture and the Hermeneutic of Intimacy, despite its mouthful of a subtitle, is nonetheless a riveting study of its subject. […] Mole’s study is concise, often groundbreaking. […] The final chapter, ‘Don Juan: Celebrity and the Subject of Modernity,’ offers penetrating analyses of several key passages in the poem. Mole is particularly good in discussing Byron’s dislike of ‘cant’ […] On the basis of this chapter, one might wish from Mole a full-length study of Byron’s greatest poem. The chapter includes superb discussion of Montaigne’s influence on Byron. […] [T]he book on the whole lives up to its author’s billing. It does advance our knowledge of Byron’s achievement considerably.”